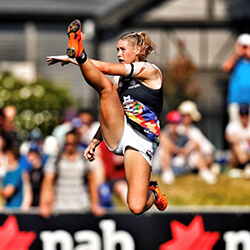 The now famous photograph of the Australian Rules Football Women’s team player Tayla Harris could become a watershed moment for Australian sport says photographer Michael Wilson. He went on to state that he feels that we will eventually look back at this moment and view it as a point in time where a line was drawn and online bullying was taken far more seriously. Wilson went on, saying that it’s shameful that women have to deal with the kind of derogatory comments and excessively negative feedback from pseudo-toughs sat safely behind a computer screen and keyboard.

The photograph captures an awe-inspiring moment, with Harris kicking the opening goal for the Carlton Football Club during their match against the Western Bulldogs on Sunday the 17th of March 2019. The image was then posted on the Seven Network’s various social media accounts, where it was subsequently swamped by ugly comments from misogynistic online trolls. The network reacted by deleting the image but reposted it with an apology after the public vociferously protested.

Harris said that she felt that she had undergone what amounted to sexual abuse, albeit virtual, in the comments, and was worried about what the people who had left her such revolting messages were doing in their private lives. Wilson has stated that the Seven Network made the wrong decision when they took the photograph down and that his intention in taking it was to capture a moment of mind-blowing skill and athleticism.