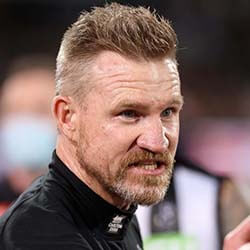 Nathan Buckley’s departure as Magpies’ coach after ten years has the world of football confused and shocked as little is known about his reason for leaving. Some speculate that he may have lost the support of Collingwood’s playing roster.

Magpies’ assistant coach Robert Harvey will be taking over the position following the Queen’s Birthday clash against Melbourne.

Reports have surfaced claiming that he had fallen out of favour with the squad due to worn out defence-first strategies. As a result, he was unable to harness the playing group as he would have liked. It is believed that the team has mixed emotions about this, with some relieved by his departure while others have stated that he will be missed.

Buckley has been quoted as saying that he had a role in making the decision and he knew that this would not last forever. He believes that this move will be to the club’s benefit and looks forward to seeing what the future holds.

Of course, this has led to speculation as to whether he was forced to leave or if he had truly decided to step aside on his own accord. Regardless of what brought this on, the messy departure is making headlines and football fans are watching to see what happens next.