Big Matches Ahead in AFL Round 20 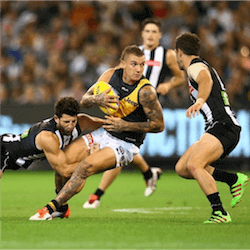 There are at some Round 20 AFL matches that footy fans will not want to miss this weekend, and Friday’s clash between Sydney and Geelong at the Simonds Stadium is the first of them. This game marks the first time that last year’s two preliminary finalists will meet in the 2017 Premiership.

The Cats haven’t beaten the Swans since 2015, and the Sydney team are favourites at $1.90. However, the Cats are second on the ladder, as opposed to the Swans in sixth, so Geelong may have the right stuff this year, at $2.00, to be worth a punt.

Saturday’s opener is also the first time Greater Western Sydney faces Melbourne this season, and with both sides full of rising stars, their clash at the UNSW Canberra Oval should be closely fought. The Demons, seventh on the ladder, need the win more, but they are at $2.80. GSW Giants currently lie third, and their odds are closer to $1.50. Get your bets in online at Crownbet and enjoy seeing if you can back a winner.

Essendon also plays Carlton on Saturday, while Fremantle takes on Gold Coast and North Melbourne plays Collingwood. With all these sides unlikely to make it out of the bottom half of the ladder, however, these matches should have little effect on the Top 8. After North Melbourne’s surprise 76-72 defeat of Melbourne last week, however, the Kangaroos might be worth a punt to create another upset, at $2.55.

Saturday’s match against Brisbane Lions at the Gabba is crucial for Western Bulldogs, though. The Dogs, $1.25 favourites, are tied with three other teams at 40 points on the ladder, but they’re lying ninth, so they need a win to keep them in the running.

All three of Sunday’s matches could have a bearing on the Top 8. St Kilda are $1.90 favourites to beat Gold Coast, at $2.10; if they pull it off, the Saints stay within striking distance of a quarter-finals berth, and the Suns’ Top-8 spot gets shaky.

Richmond are the $1.80 favourites to beat Hawthorn and maintain their fourth place on the ladder, and ladder leaders Adelaide, at $1.55, are also favoured to hold off fifth-placed Port Adelaide at the Adelaide Oval.