Bryce Gibbs To Retire At End Of AFL Season 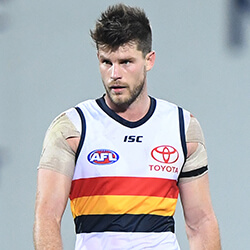 The Adelaide Crows midfielder broke the news on Thursday, saying that he will be retiring at the end of the 2020 season. Which of course means that the clash against Carlton is effectively his last – a clash that will draw to a close a 14-year-long, 257-game professional Australian League Football career.

Though definitely disappointing for just about everybody else, Gibbs’ retirement will be a fitting end for the 31-year-old 2006 National Draft’s illustrious career. Having “given his all” in all of 14 seasons played at the top level of the sport, Gibbs on Thursday proclaimed himself looking forward to playing against some of his “lifelong” Carleton friends for one last time.

The star midfielder also thanked the Crows for what he described as their having allowed him to move back home to South Australia and be closer to family and friends, while doing what he loved best. The club was “home” for all of 11 years, said Gibbs of his time spent with Adelaide.

The decision to retire may not be easy from a footy point of view, said Gibbs, but since the club is currently undergoing a process of rebuilding, he regards stepping aside and allowing a new generation to step up to the opportunities plate as being the right thing for him to do.

Even though Gibbs this year did not get to play nearly as much football as what he probably would have liked, said coach Matthew Nicks of the midfielder’s announcement, he still managed to show incredible leadership on the few occasions he did get to make in onto the field.