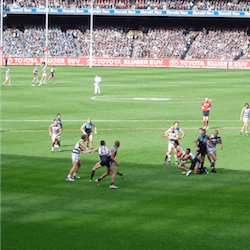 Busy Round 14 AFL Premiership Weekend Ahead

Round 14 of the 2017 AFL Premiership is jam-packed with action. Ladder leaders Adelaide need to break a jinx on Thursday night; with Hawthorn currently lying second-last, the Crows may finally be able to beat the Hawks at the Adelaide Oval, for the first time ever.

On Friday night, Essendon play the Swans at the SCG, and the Dons will be looking to defend their Top 8 spot against a resurgent Sydney side making a late charge.

Saturday and Sunday bring Aussie online betting fans an absolute feast of footy, starting with Collingwood vs. Port Adelaide at the MCG on Saturday afternoon. The Power, currently fourth on the ladder after beating Brisbane Lions by 40 points last week, are the favourites here, despite losing winger Jared Polec to injury.

The Giants are the favourites in Saturday’s second match, when they play bottom-of-the-ladder Brisbane Lions. The GWS side might lose ace midfielder Josh Kelly to a hip niggle, but big Rory Lobb looks like he’ll be back from his groin injury.

Defending premiers Western Bulldogs have had a patchy season so far, but several pundits reckon they can prevail over North Melbourne at the Etihad Stadium on Saturday night. If you want to wager on the outcome, check out what LadBrokes has to offer, there are great odds for this, and other AFL matches.

The match that should produce the most hard-fought action on Saturday, however, is the last of the night: West Coast Eagles hosting Melbourne in Perth. The Eagles are back at the Domain Stadium a week after their win against Geelong, and they are currently just four points ahead of the Dees, in sixth place on the ladder. Melbourne hasn’t beaten the Eagles anywhere since 2009, and not in Perth since 2002, so this looks set to be a humdinger.

Richmond vs. Carlton Could Go Either Way

Despite their loss to the Eagles last week, the Cats look likely to bounce back convincingly against Fremantle at the Simonds Stadium on Sunday.

The Richmond vs. Carlton derby at the MCG is likely to be much closer, as the traditional rivals are evenly matched, now that the Tigers seem to have lost some of the form that has allowed them to win two more games than the Blues this season.

The final game of the weekend, St Kilda vs. Gold Coast Suns at the Etihad Stadium, may also be too close to call, with both sides desperate to get back within striking distance of the Top 8.