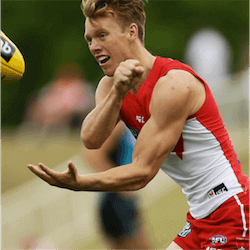 Callum Mills has officially signed a five-year contract extension with the Sydney Swans. It may be coincidence or it may be fate, but at the same time Mills signed the multi-million dollar contract, his long-time boyhood idol, Tony Lockett retuned to the club. Apparently at the age of just three, Callum was not happy with his own name and wanted to be called Tony Lockett, such was his admiration of the sporting icon.

Callum’s mother revealed his childhood secret last year when he made his AFL debut for the Swans. While Callum wasn’t too impressed with his story doing the rounds, it did nothing to hinder his amazing performance which cumulated in him receiving the Rising Star Award and playing the in the AFL Grand Final. The new contract sees Mills tied to the Swans for an additional five years on top of his existing two-year contract. Altogether, Mills will be calling the SCG home until the end of 2024.

As if the deal wasn’t sweet enough, the 19-year old rising star will also be coached by his boyhood idol, Tony Lockett. Speaking to the press, Calum said that the appointment of Locket was truly massive. Not only will Lockett help with the forwards and goal kicking, he will also do wonders for the history of the club. Mills said that bring ex-players back into the club is always an exciting prospect.

When asked if the appointment of Lockett had anything to do with his re-signing with the Swans, Mills simply said that it wasn’t a difficult discussion for him as the club had given him so much already. For Mills, the Swans were the club he had grown up cheering for and he has loved every single minute spent with the team. Mills said that he wanted to repay the club by working hard and playing for a team that wins premierships.

After attending his first training session with Lockett, the one thing Mills can say is that Lockett is still very much a forward. According to Mills, defenders are at the bottom of the pecking order when it comes to training. The forward line gets most of the coaches’ attention while the defenders pick up where the forwards leave off.