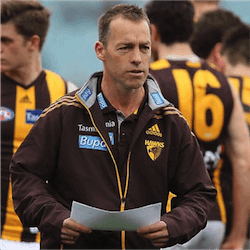 It’s not something you would here often but Hawthorn coach Alastair Clarkson has admitted that he would have struggled with the futures of both Jordan Lewis and Sam Mitchell had they stayed under his charge in 2017. Both Mitchell and Lewis left the Hawks during the trade period in a move that sent ripples across the footy world. With Mitchell heading for the West Coast and Lewis for Melbourne, the Hawks coach said he was happy with the decision.

Speaking to the press, Clarkson said that the club had a special relationship with the pair. He thought that both Jordan and Sam deserved the opportunity to control their decision-making. Clarkson was thinking how in round 16 or 18 he was unable to look the players in the eye thinking that their time was up at the footy club. In the end, the Hawks wanted to give Lewis and Mitchell the long-term security they needed having come to the end of their careers.

The Player’s Made the Decision

Clarkson said that once the decision was made, the Hawks didn’t try and talk either player back. When it first came up, both Sam and Jordan had the choice to park it or explore the decision further. According to Clarkson, the players had sole autonomy around the decision. It turns out that Jordan Lewis was offered a two-year deal with Melbourne and chose not to pursue the idea. When the deal was moved to three years, he eventually accepted the offer.

Both Lewis and Mitchell’s departure came straight off the back of a disappointing AFL season for the Hawks. After running into the mighty Western Bulldogs in the 2016 semi-finals, the Hawks ended on a low note. It is said that Clarkson had little interest in contesting possession stats during the season. With the Hawks finishing last in the contested possession differential for 2016, Clarkson now admits that it is one area where the team has to improve.

Clarkson said that the Hawks don’t base their game around contested ball. That being said, he doesn’t want to be last in the competition and thinks it is certainly important going forward. With Luke Hodge suspended for missing a training session, the Hawks round 1 clash against Essendon will be the team’s first game without Hodge, Lewis or Mitchell since 2002.