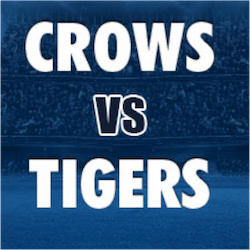 An AFL Grand Final always puts footie fans in a festive mood, but the Richmond Tigers faithful can be forgiven if they’re going a bit over-the-top this year. Saturday will see the Tigers run out at the MCG for their first GF appearance in 35 years, and at Friday’s final training session, fans were queuing to watch their heroes at Punt Road from 4am.

It took 20 minutes to fill up the ground to its capacity of 5,000, with hundreds of disappointed Tigers supporters shut out. No doubt, many of them will be in the stands on Saturday to cheer their side on against the Crows.

South Australians will be cheesed off that ladder-leaders Adelaide can’t get a home final. Some commentators and supporters are now calling for the tradition of GFs at the MCG to be abandoned, so that the championship game in the annual AFL Premiership can be played at the home ground of the team that finished highest on the ladder instead.

Richmond reached the final after taking 15 wins from 22 games in the regular season, placing them third on the tournament ladder. That brought a Qualifying Final against the second-placed Geelong Cats, which the Tigers won 91-40, before going on to beat Greater Western Sydney 103-67 in last Saturday’s Preliminary Final.

As they have been for most of the competition, after topping the ladder from Round 1 and suffering only six losses and one draw in the regular season, the Adelaide Crows are the favourites to win the 2017 AFL Grand Final. They beat the Giants 84-48 in their QF, and although the Giants then went on to beat the West Coast Eagles in their Semi-Final, they ultimately fell to Richmond in the PFs.

The Cats, meanwhile, won their SF against the Sydney Swans, but then lost the PF spectacularly to the Crows in Adelaide last Friday, going down 136-75.

Both coaches are confident that their teams are going into the GF injury-free, although there is still concern among Crows fans that Adelaide midfielder Hugh Greenwood’s calf isn’t 100%. The Crows are nevertheless the favourites online, with betting sites offering them at around $0.70, although the Tigers are hardly outsiders, at $1.10-$1.20.