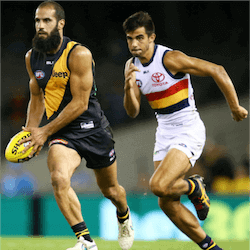 Thursday night saw AFL ladder leaders Adelaide crush fourth-placed finishers Greater Western Sydney by 36 points in the first Quarter-Final of the 2017 season. Eddie Betts kicked three goals in front of his home crowd and helped set up another two brilliantly, and the tournament favourites imperiously set up a home Preliminary Final with a final score of 12.12 (84) to 6.12 (48).

At the MCG on Friday night, Geelong were justifiably upset over having to play at Richmond’s home ground, after finishing above them in second on the regular season ladder. However, the size of the expected crowd forced the shift from Simonds Stadium, and a below-par Cats team went down to the Tigers by 13.13 (91) to 5.10 (40).

The Giants and the Cats aren’t without any hope of a PF, of course. They play the winners of the Elimination Finals that were held on Saturday in this week’s Semi-Finals, to decide who will play the Crows and the Tigers in the PFs.

Back at the Adelaide Oval, West Coast and Port Adelaide delivered arguably the most exciting game of the week, and only after extra time could the Eagles triumph over the Power, with a final score of 12.6 (78) to 10.16 (76). The Eagles now travel to the Spotless Stadium for Saturday’s SF against the Giants, where the home side, at around $0.45, are again the favourites.

The PFs are scheduled for Friday, 22 September at the Adelaide Oval and Saturday, 23 September in Melbourne. The Crows will be playing either the Swans or the Cats, but they remain the outright futures favourites to win the Grand Final on 30 September at between $1.25 and $2.50.

The Tigers, second in the outright futures market at $1.80-$2.50, will play their PF against the Eagles or the Giants. The match will be played at the MCG next Saturday. According to most betting sites, the Swans or the Giants also stand a better chance of causing a Grand Final upset than the Cats or the Eagles.