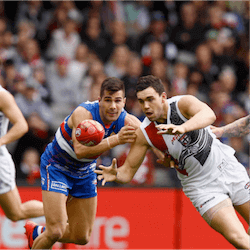 It’s AFL  Premiership crunch time for the Western Bulldogs this Friday night. Coming back from a Round 15 defeat to West Coast at Etihad Stadium on Saturday, their fourth loss in five weeks, the defending champions are now on a record of seven wins and seven losses this season, and lie 10th on the ladder.

For Friday night’s do-or-die game at the Adelaide Oval, the Melbourne side will not be thrilled that their opponents are the formidable Crows; strong favourites to win at home, at odds of around $1.30. Adelaide are currently second on the ladder with 10 wins from 14, on 40 points, after the Giants and the Cats drew last week, putting Greater Western Sydney into the top spot on 42 points, and leaving Geelong third on 38.

The Giants are $1.40 favourites in Saturday’s first match, against Hawthorn at the UTAS Stadium in Launceston. Next, Essendon need to beat Collingwood at the MCG to keep their slim hopes of a spot in the finals alive. According to the betting, it’s too close to call.

Sydney are favourites to beat Gold Coast at the SCG later on Saturday, as the Swans are on a streak of seven wins from their last eight matches. Brisbane Lions play Geelong at the Gabba, but even at home, it will take a very optimistic Queenslander to bet against the Cats, despite bottom-of-the-ladder Brisbane’s unexpected win against the Bombers last Sunday. You can place on all these matches and more at Crownbet, an online sportsbook that offers great odds on all AFL games.

The key match on Saturday is likely to be clash between St Kilda and Richmond at Etihad Stadium. The Tigers are fourth in the 2017 AFL Premiership, with 36 points, while the Saints are clinging to eighth place, on 32. A win from either team will reshuffle some of the top contenders.

There are three games on Sunday, starting back at Etihad Stadium for North Melbourne v Fremantle. At the MCG, Carlton and Melbourne meet in a clash that the Demons need to win, after their shock 35-point loss to the Swans last week. With several Melbourne stars injured, underdogs Carlton might deliver a handsome win at $2.75.

In Sunday’s final match, West Coast host Port Adelaide at the Domain Stadium. Lying seventh and fifth respectively on the ladder, there’s little to separate these two. But with the Eagles dominating at home this year, the Perth side looks like the better bet at around $1.60.