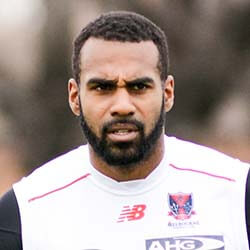 Former Collingwood star Héritier Lumumba has responded to the AFL club’s independent report into racism within the organisation by accusing the club of “cowardice”.

Lumumba over a series of interviews with the media made no secret of his ongoing loggerheads with Collingwood over the way he feels they handled his countless complaints about racism and the way he was being treated while playing for the club. The former defender spoke out about how he had experienced the “wrath” of institutional power during his time at Collingwood. He said this twisted power could be sensed and seen everywhere – from the information-feeding public relations department, right down to the media who had been led to paint him as the problem, and not the culture within the club itself.

The former Pies defender said the way he had seen the club and its president react at Monday’s press conference was once again clearly a desperate attempt at damage control. He said Collingwood was blind to where the world was actually positioned on racism and institutional power right now.

AFL boss Gillon McLachlan has in the meantime reiterated his support in terms of standing by McGuire, praising also the club’s own decision to commission an internal inquisition into racism. McLachlan said that although he was disappointed by the “tone” of McGuire’s conversation, he still supported his president’s commitment to the changes detailed in the report.