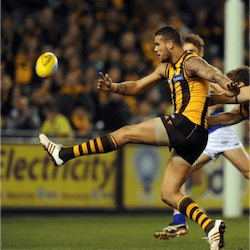 It looked like a simple pick for AFL Premiership betting fans: Adelaide are top of the ladder, while Hawthorn were lying second-last. The Crows were set to meet the Hawks at the Adelaide Oval, where just three weeks earlier Port Adelaide had humbled the Melbourne side 98-47.

As a result, Adelaide 54r5was the universal favourites, with Hawthorn being offered at odds as high as $7.00. Nobody paid any attention to more cynical pundits, murmuring things like, “The ladder means nothing,” or, “The Crows have a hoodoo against the Hawks: they have never beaten them at the Oval.”

On Thursday night, the cynics were proved right, to the noisy disappointment of the Adelaide crowd. Online punters were thrilled, however. What they got was an epic display of never-say-die footy, and four quarters of seesaw action that proved just how close the competition is this year.

Their 14-point win, coming from behind in the final term, boosted the Hawks one place up on the ladder to 16th. Currently, there is a difference of only two winning games between first and seventh place in the tournament, and the eighth and 16th teams on the ladder are separated by a single win.

In other words, with nine-and-a-bit rounds left in the home and away season, the top eight and the 2017 Premiership finals are still wide open. After their stunning performance on Thursday, delivered by a team that seemed to comprise equal parts returning veterans and rising stars, the Hawks are by no means out of contention. Neither are the seven teams immediately above them, who are also desperate to break into the top eight.

Grant Burchill, coming back from a knee injury, performed useful service against the Crows, with 28 disposals. Another veteran who made a big impact was Tom Mitchell, with a game-high 38 disposals.

But there were plenty of youngsters playing a role in the Hawks’ Thursday night victory too: like Ryan Burton, Shaun Burgoyne and, adding insult to injury, ex-Crow Rickey Henderson. Yet after ending the first term on even scores, the Hawks were trailing by half time.

Hugh Greenwood, one of the most impressive Crows’ players on the night, put the Crows five points ahead at the final change. In the final term, however, goals from Henderson and Paul Puopolo put Hawthorn over the top by 96-82, and revived their slim hopes of making the knockout stages.