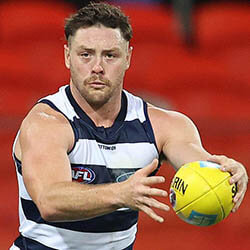 Prominent Gun Cat and star midfielder Jack Steven has called time on his professional career. The Geelong midfielder’s retirement announcement came as a surprise to many because of the fact that there remains one more year on his contract with the franchise.

Geelong General Manager of Football, Simon Lloyd, has responded to the midfielder’s announcement by declaring the club happy with Steven’s announcement and wishing him all the best for the future. Geelong greatly enjoyed having the star midfielder as part of the team, said Lloyd, but at the same time also now looks forward to seeing him live a happy post-football life.

Steven after an already illustrious career playing pro-football and winning several prominent awards, as recently as the 2019 off-season made the move to join the Cats. During his time playing for the club, he managed to add nine more games to his 183-game career.

He midfielder however struggled trying to secure a spot in the Cats 22 and ultimately ended up missing the finals due to an injury sustained during a practice match.

Steven’s decision to retire means he now joins several other players to have made an exit from the club this year – including Harry Taylor and Gary Ablett, as well as delisted players James Parsons, Blake Schlensog, and Jacob Kennerley.

Steven before joining the Geelong Cats played a total of seven games for the Saints amid a severe personal battle with mental health. He also during his stint with Geelong spent time in hospital recovering from a stab wound to the chest suffered early in 2020.