Mark Williams Says AFL Rules Are News To Him 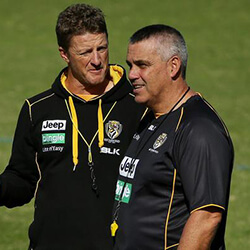 A new set of rule changes announced earlier this week by the AFL are according to Werribee coach and AFL coaching great Mark Williams, news to him. Williams recently told a prominent sport and racing breakfast show that he was at no point consulted by the league about the changes, and that many now consider the new rules to have been formulated and implemented “on the run”.

The new rules announced by the AFL include a trial to be played at second-tier level of zones and additionally, at every boundary throw-in as well as every boundary kick-in. This marks a number of radical changes – with the most prominent of all the change from the current implementation of second-tier zones exclusively at centre bounces only.

Williams during his commentary expressed his disappointment and surprise at the AFL’s failure to flag the possibility of zoning rules changes before going full-on public with the announcement. The stalwart said what he considered most bizarre of all was that he in his capacity as a VFL coach wasn’t even as much as tipped off.

He did however add that despite his having been taken aback by the lack of consultation, he understood wat the league was trying to achieve with the new rules. But though he pointed that that the league’s decision makers were trying their best to achieve certain goals, he said he wouldn’t be the first extend his endorsement. He said that making multiple changes all at once hardly ever ended well.