MCG Cracker to Open AFL Round 19 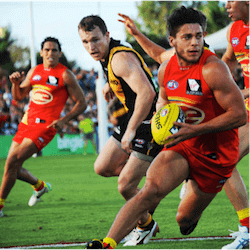 Swans Cracker to Start AFL Round 19

Aussie footy fans are expecting a belter to start the 2017 AFL Round 19 on Friday night, when Sydney take on Hawthorn at the MCG. The Swans took their seventh win in a row last Saturday at home, beating St Kilda 101-59 to go to sixth on the ladder.

Continuing the late charge that put them into the Top 8 after a poor start this season, Sydney need another convincing win. But with almost an oversupply of talent, they are $1.47 favourites over the Hawks at $2.75.

Saturday kicks off with a North Melbourne v Melbourne derby, with the Kangaroos as $2.95 outsiders. The $1.42 Demons pulled off an 88-65 win against Port Adelaide last Saturday that dropped the Power to fifth above Sydney, and took Melbourne up to seventh, with all three on 40 points. If you want to wager on this, or any other AFL games, check out LuxBet’s odds and markets.

Saturday’s GWS Giants v Fremantle game at the Spotless Stadium has the $1.14 Giants, third on the ladder with 44 points, needing a win after their loss to Richmond last Sunday. Saturday’s third match is the Power against the Saints. St Kilda, on 36 points like Essendon, needs a victory to stay within touching distance of the Top 8; but Port Adelaide are $1.22 favourites at home.

Saturday’s most crucial matches, however, are the last two: Gold Coast v Richmond and Carlton v Geelong. The Tigers’ win over the Giants put them fourth on the ladder, with GWS in third, and both on 44 points. If the Tigers, at $1.36, beat the Suns, they stay in the top contenders, even if the Giants beat Fremantle.

The Cats lost last week to ladder leaders Adelaide, although Geelong remains in second place on 46 points, behind the Crows’ 52. At $1.22 versus $4.50, the Cats are heavy favourites to beat Carlton and retain second place.

Sunday’s first match, Western Bulldogs vs Essendon, should be another cracker. With both teams on 36 points but the Dons, at $1.85, in the Top 8 on percentages, a win by the $2.00 Dogs could see them shift positions again. It would seriously dent Essendon’s late challenge for the finals.

Sunday’s last two AFL games are Collingwood vs Adelaide, with the ladder leaders $1.35 favourites, and West Coast Eagles v Brisbane Lions, with the Perth hosts even more heavily favoured, at $1.08.