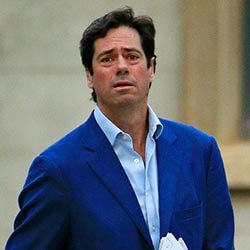 Australian Football League Chief Executive Officer Gillon McLachlan has pledged that the League will have retained all 18 of its clubs in their current composition when the competition shutdown finally comes to an end.

This vow comes in light of the game struggling to sustain a catastrophic economic hit due to the coronavirus COVID-19 pandemic. The AFL has been forced to secure an enormous AU$600 million line of credit from banks and all-inclusive cost-cutting has become a major focus.

This has led to speculation about whether certain debt-riddled Clubs are going to be able to survive the bedlam intact or whether mergers, relocations, or going out of business altogether may be on the cards for them.

But while McLachlan refuses to indicate his long-term view on how many AFL Clubs are likely to survive, or where they will be located, he’s remained adamant about the short-term. He’s been quoted as saying that we went into lockdown with 18 Clubs and we’ll be coming out of it with the same.

He explained that this is what the organisation’s commitment looks like for at least the next 10 months, that the elite level’s structure remains as it has always been. He refused to add to the current speculation but did admit that mergers and relocations may be a possibility in the long run.

McLachlan said that the association’s current task is to preserve revenue streams, cut costs across the board, raise liquidity, and focus on coming out of the other side of the shutdown intact.