No home final for the AFL Brisbane Lions 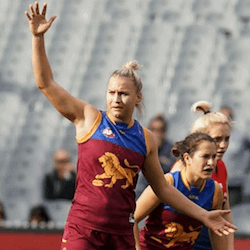 In the sporting world, it is not often that music superstars have any effect on where and how a game is played. For the Brisbane Lions woman’s AFL team, a sell-out crowd at two Adele concerts have crushed their dreams of hosting the first AFL woman’s Grand Final. Brisbane won the right to host the big decider after a brilliant undefeated season consisting of seven rounds. Instead, the Lions will now play Adelaide at the Carrara Stadium in Queensland.

After a final inspection by the chief ground staff, the Gabba pitch was deemed unfit for use in the Grand Final. Brisbane Lions Chief Executive, Greg Swan said that there was small patch of grass that had recently been sewn into the pitch. According to Swan, the grass is shifty and it hasn’t had time to take yet. It was this tiny patch of grass that has caused the team’s dream to come apart. The team is understandably disappointed and is wondering why grass was sewn onto the field so late.

The match which has been moved to Queensland will now act as the curtain-raiser for the men’s round-one match of the Queensland derby. Speaking to the press, Lions player Selina Goodman said that they were disappointed, as the team had earned the right to host the match. Despite the bad news, she says the girls are raring to go and ready to win the Premiership.

Queensland Cricket Have Their Say

AFL Chief Executive Gillon McLachlan also expressed his disappointment. He said that discussions had been going on for weeks about hosting the Grand Final at the Gabba. In compensation, he said that attendance to the final would be free and he hopes that State Government would also step in to maximise transport options for the fans. Singing Superstar Adele held two concerts at the Gabba with thousands of seats set out on the playing surface, which was covered by protective plastic covering.

Former Brisbane Lions Coach Leigh Mathews pointed out that other stadiums in Australia did not have any issues after hosting Adele concerts. At the Etihad, the pitch was ready to go one week later but the Gabba had issues even three weeks down the line. With the stadium under fire, Queensland Cricket have asked that the Gabba not be used for the AFLW Grand Final and that the men’s Lion’s team play elsewhere in order to give the surface time to recover for the Ashes.