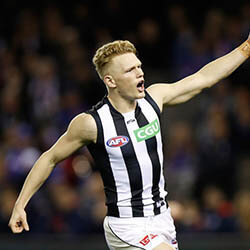 Collingwood player Adam Treloar faces the possibility of being used as “bait” in return for the signing of a key forward to be played in the future. Contracted until the end of 2025, Treloar is said to believe in the intention of the Pies to turn him into a fall-guy should the desired forward become available.

Since free agent Jeremy Cameron has already named Geelong as his club of choice – this was on Monday night – the Pies are however left remaining with two options only: Ben Brown and Joe Daniher. The North and Bomber players are the only two talls not yet signed by new clubs after their respective departure announcements.

But according to prominent sports reporter Jon Ralph, being trade bait isn’t necessarily the worst of news for Treloar. Since several other clubs deem the player “gettable”, Ralph said he reckons all not to be lost what with the likes of Jeremy Cameron, Jack Gunston, and Tom Morris officially off the table.

The reason behind Treloar’s supposed selection as the chief fall guy for the Magpies is basically twofold, said Ralph. He’s firstly now entering the back of a deal that would soon place him on significant money – what with his being left with at least five seasons remaining on this contract with the Pies. The second key consideration is the actual stats – out of a total of 234 players who had aced 100 kicks this year, Treloar performed third from last.