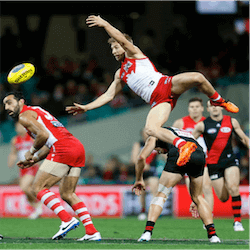 AFL Premiership fans can expect some explosive footy on Friday night, when the Bombers meet the Swans at the SCG. After an abysmal start to their season, the Sydney side is looking more like the Swans we’re used to; they’ve won five of their last six matches, including a heroic comeback from a deficit on Saturday to beat Richmond 80-71. Punters looking to get their wagers in in advance would do well to do so at Luxbet, as they offer a wide range of markets.

Essendon have just sat out the final bye round, immediately after delivering a 131-61 thrashing to Port Adelaide, so they will be itching to get back into the fray. They also have a precarious position on the points ladder to defend. There are five teams currently sitting on 24 points, separated only by their for/against goal percentages.

Essendon Eighth on the Ladder

The Dons are currently eighth on the ladder, behind Melbourne. But defending champions the Western Bulldogs are snapping at their heels, 0.5% behind them, followed by St Kilda and Fremantle. Essendon needs this win to firm up their position in the Top 8.

That said; the Bombers have not done well in their away matches, especially at the SCG. Punters shouldn’t be surprised if they can turn it around this time, though, as they are fielding some top players with blinding speed. It was the pace of the likes of Orazio Fantasia, Anthony McDonald-Tipungwuti and Conor McKenna that flummoxed the Power two weeks ago, and they will be back to bring it again in Sydney.

The Swans needs the victory on Friday even more, however, if they are to continue their belated charge towards a spot in the knockout stages. They are currently lying 12th with 20 points, 16 points adrift of ladder leaders Adelaide and GWS.

Their task isn’t made any easier by the continued absence of Kurt Tippett from Friday’s squad. The persistent ankle injury that kept the ruckman out of Sydney’s winning games against Richmond and the Bulldogs is still troubling him.

Sydney coach John Longmire hasn’t been left completely without good news, however. It looks like veteran former co-captain Jarrad McVeigh will finally be recovered from his calf and hamstring niggles in time for Friday’s match. A final decision on his fitness will be taken after training on Wednesday.