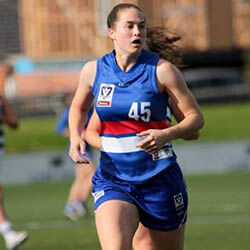 Dani Marshall née Hering made history in autumn of 2019 when she became the first woman from the USA to enter into a contract with the Australian Football League’s Western Bulldogs. She’s gone on to celebrate another first thanks to her initial kick in a 10th of February 2020  game turning into a goal, helping to get her team to a 25-point victory over St. Kilda. Speaking recently from her home in Essendon, Melbourne, Marshall said that a short 19 months ago she could never have imagined her life right now.

Marshall graduated from The Classical Academy in 2009 and now wears jersey No. 26 for the Western Bulldogs. When her first kick went for a goal on the elite stage she wasn’t quite sure how to react and television footage from the game shows her searching for someone to hug. She settled first on Kirsty Lamb, went on to embrace Lizzie Georgostathis, and ended with a squeeze from Bonnie Toogood.

Marshall revealed that she was indescribably happy after she scored the goal, telling reporters that she’s always dreamed of playing a sport at a top level. She said that she never dared dream it would be Football and that even though it’s now happening she still can’t quite believe it!

She moved to Melbourne in 2019 so she could start training with her AFLW team. Her husband, Ryan, was previously employed by Honeywell Aerospace in Arizona, but has now joined his wife in the country and is currently searching for full-time employment here.