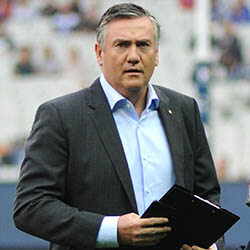 Edward Joseph McGuire AM, the current president of the Australian Football League Collingwood Club, is in support of a three-state plan to get the game up and running again and David King, the former footballer, is demanding more transparency from the League. It is being claimed that the association is sewing uncertainty in fans and members of the media alike after what was supposed to be a comprehensive interview was castigated for being evasive.

The news that Eddie McGuire is backing the plan for the AFL to head to South Australia, Tasmania, and Western Australia to get the game going again this year came at the same time as King’s tirade about Steven Hocking’s prevaricating Herald Sun interview did. McGuire has said that the three-hub idea has been stewing for a while now and that it had sprung from a number of sources.

With the sporting world in limbo as we wait for any live sport to start up again in the wake of the coronavirus COVID-19 pandemic, the AFL has kept quiet about possible future scenarios. Hocking simply told journalist Mark Robinson that there are 10 potential outcomes for this year’s season.

When asked when the AFL would return, Hocking replied that the League is still looking at a season with 144+ games but refused to place any kind of timeline on it. And while he acknowledged that the AFL has discussed splitting into three hubs, he refused to commit to any real answer here, either.