The Australian Football League’s On the Comeback 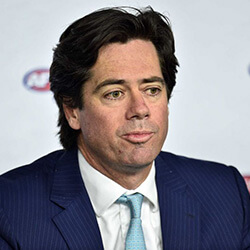 Chief Executive Officer of the Australian Football League Gillon McLachlan has confirmed the date on which the games will resume. He has also detailed the Return-to-Play scheme that includes training starting up again this week.

Clubs will be able to begin non-contact training today, Monday 18th May, in groups of up to eight athletes before a full return to contact training. The latter is to include two sessions weekly and will be introduced from May 25. After initial swabs last week, both players and officials are going to be tested for the novel coronavirus COVID-19 a minimum of 24 hours before each session so as to have results back before these meetings begin. A fixture for the opening four weeks of games is also going to be released inside of the next 10 days.

Speaking on Friday the 15th, McLachlan said that this marks a milestone in getting Football back for everyone. The list includes clubs, coaches, fans, officials, players, and staff along with AFL’s broadcast, corporate, and club partners. He added that as the situation keeps evolving, focus will be put on everything staying flexible so that adaptations can be made wherever necessary while the health and welfare of everyone involved remains a priority. McLachlan said that it’s vital that no additional burden is placed on the public health system when the games resume.

McLachlan said that their model has been developed as the best option for returning to games for the general public, officials, and players. He stated that it was created following extensive consultation with Chief Health Officers and various Federal, State, and Territory Governments.