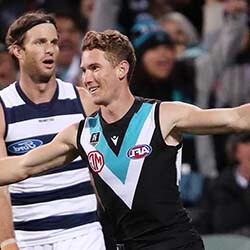 In the recent game against Geelong, Port Adelaide’s Kane Farrell has made headlines for what is believed to have been a miracle goal.

While Geelong did end up winning the game, the victory has not made headlines the same way that Farrell has. The nail-biting games saw both teams chase the win, with the lead changing between the two multiple times. Port Adelaide had a four-point lead at the first break, however, at the midpoint of the game, Geelong had a 13-point lead.

During this time, the miracle goal occurred. Farrell got the ball to the boundary line before booting a banana and swinging it through. It has been described as defying the laws of physics as many believe that the ball should not have spun the way that it did. Adding to the craziness is the fact that it was Farrell’s first touch of the ball. Commentators, spectators, players, and even Farrell were shocked by this spectacular moment.

This is not the first insane goal of the season. Carlton star Eddie Betts also made a spectacular goal against the Swans while Dockers midfielder Andrew Brayshaw also followed suit.

Unfortunately, Port’s victory could not be secured as Geelong went on to win the game with a 44-point lead. Perhaps Port Adelaide was overcoming the shock of Farrell’s performance which led to the unfortunate defeat. Regardless, it was an exciting game for all and amazing to watch.

Nathan Buckley’s departure as Magpies’ coach after ten years has the world of football confused and shocked as little is known about his reason for leaving. Some speculate that he ….

Former Collingwood star Héritier Lumumba has responded to the AFL club’s independent report into racism within the organisation by accusing the club of “cowardice”. Lumumba’s comments followed the controversial press ….