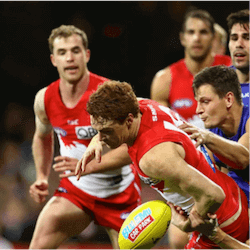 There are six more weeks of home and away games ahead in the 2017 AFL Premiership, before the Top 8 embark on the knockout rounds. In Round 18 this weekend, there are some betting options footy fans should take a close look at, all of them on Saturday.

There are three sides currently close to the Top 8, but they need all the wins they can pick up in the final six rounds. Round 17 played largely as expected: in most matches, the side higher up on the ladder took the win. The exceptions were Friday’s derby between St Kilda and Essendon at Etihad Stadium, and the all-Sydney match that pitted the Giants against the Swans on Saturday night.

The Saints were clinging to seventh place on the ladder, having beaten Richmond the week before, but the Dons were even more desperate to work their way up, after a comeback victory over Collingwood in Round 16. They beat St Kilda 118-57 on Friday night, leaving the Saints down two places in ninth, with the Bombers on 32 just four points behind them, in 10th.

Saints Have Tough One on Saturday

Essendon now have a chance to get even closer to the Top 8 at Etihad in this Saturday’s first match, in which they are $1.32 favourites against North Melbourne. After losing yet again last Saturday, going down 127-57 to Port Adelaide, the Roos are languishing second-last on the ladder, with 16 points.

It’s the Saints who have the tougher ask this Saturday, playing the Swans at the SCG. Undefeated in their last six games, Sydney turned Giants-killers on Saturday night in front of the biggest crowd Spotless Stadium has ever seen for any sport. They won 96-83 to go to 36 points, sixth on the ladder thanks to their percentages. They’re $1.26 favourites in Round 18, but sheer desperation could make the Saints a worthwhile punt at $4.40. You can get your bets in online at Luxbet, and you’ll find great odds for this and all other AFL games too.

Bulldogs Hoping to Pull Off Comeback

The other side trying to fight back into the knockout rounds are defending champs Western Bulldogs, who also woke up late. They beat Carlton last Sunday to go to 11th, with equal points to Essendon, but behind on percentages. They are $1.45 favourites to beat Gold Coast Suns on Saturday.