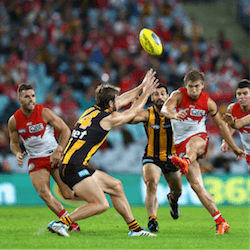 AFL Top 8 Firming Up at Last

There are two weeks of the 2017 AFL Premiership regular season to go, and the Bombers are dropping away, while the Saints might be off the calendar. Both sides are on 40 points, with nine teams above them.

Below Essendon and Saint Kilda, Hawthorn, Collingwood, Fremantle, Gold Coast, North Melbourne, Carlton and Brisbane Lions are on 38 points or fewer, so their best bet at this point is to start planning next year’s comeback.

At the other end of the ladder, the Top 4 look unlikely to be unseated before the knockout rounds. Adelaide Crows have a one-win, one-draw lead on 62 points, followed by Greater Western Sydney Giants on 56, Geelong Cats on 54 and Richmond Tigers on 52.

Sydney Swans and Port Adelaide are separated on 48 points only by their percentages, as are Melbourne Demons, West Coast Eagles and Western Bulldogs on 44.

With the Dogs lying ninth, they have all the motivation they need to make Saturday’s opening match against Port Adelaide a cracker. The Power are actually the underdogs, at $1.96 to the Bulldogs’ $1.90, so expect fireworks in Ballarat.

On Friday, the Swans will get Round 22 started with a trip to the Adelaide Oval for another clash of the titans: the Crows are the $1.67 favourites at home, with the Swans at an encouraging $2.25.

The Eagles, facing the Giants at Sydney’s Spotless Stadium on Saturday, desperately need to beat the $4.50 odds against them if they are to stay secure in the Top 8. The Giants are at $1.25.

Melbourne should have an easier job to maintain their place in seventh on Sunday; the Demons are $1.16 favourites to beat the $5.80 Lions at the MCG.

If the Dons don’t beat Gold Coast Suns in Queensland on Saturday, they kiss all hope of the Top 8 goodbye. Essendon are the favourites at $1.26, but the Suns at $3.50 could surprise at home.

Likewise, St Kilda needs the win over North Melbourne at the Etihad Stadium on Sunday. The Saints are being offered at $1.40, but Roos fans will be hoping for a $3.10 upset.

Get your bets in online at Luxbet and watch to see whether your prediction makes you a winner.