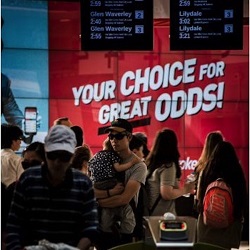 With government and anti-gambling politicians on the gambling warpath, local Australian bookmakers have increased their advertising campaigns in an effort to reduce the negative exposure. While Senator Nick Xenophon and his crack team of anti-gambling lawmakers are doing everything they can to stave off the tide of online betting, the increase in betting related advertising has not gone unnoticed. In a recent report, new Nielsen data showed a massive upswing in bookie-generated advertising.

According to the report, Australian bookmakers spent approximately $125 million on various advertising campaigns up to the end of June 2016. This figure marks an overall rise of 25 per cent when compared to the same period in 2015. While the figure might not sound too extreme, the report was quick to point out that the 25 per cent increase did not account for advertisements on pay-tv and dedicated sports channels. The actual figure is expected to be much higher when all aspects of the industry are factored in.

According to the report, online bookmaker Sportsbet led the way, spending a total of $38 million on advertising over the course of the year. This translates to an increase of 20 per cent for one of Australia’s leading online bookmakers. In a disclosed financial statement, a representative from the company confirmed that Sportsbet dedicated an additional 35 per cent budget increase for their sales and marketing division. The representative went on to explain that the increase was due to a substantial investment in the media industry, as well as cost inflation in response to an increasingly competitive environment.

Local operators Tatts Group and Tabcorp boosted their advertising budget by investing $8 million and $18 million respectively. The report explains that the smaller numbers were a direct result of limited advertisement budgets. What may be occurring is a reduced overall budget fuelled by higher taxation rates on local based bookmakers. While most bookmakers were doing everything they can to boost their advertising, some were actually focused on reducing their advertising budgets.

William Hill was one of the few online bookmakers who physically reduced their advertising budget for use in other areas. As a major player in the industry, William Hill cut their advertising spending by 21 per cent while still retaining their large share of the market. Based on the total increase in advertising, many in the industry are expecting a harsh backlash from Xenophon and the anti-gambling movement, but for now, marketing campaigns are running full steam ahead and promoting the exceptional offerings of leading online bookmakers to the full.

Tatts and Tabcorp in Merger Deal Australia’s two largest bookmakers, Tattersalls and Tabcorp have agreed to merge and create a central company that will control over 90 per cent of ….