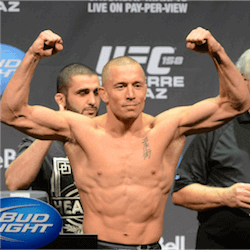 St-Pierre Hailed as the Greatest- Now What’s Next?

MMA fans saw Georges St-Pierre come roaring back from almost four years out of the octagon for UFC 217 in early November. Defending UFC Middleweight Champion Michael Bisping was game as they come, refusing to submit to a rear naked choke in the third round until the Canadian rendered him unconscious, a result that instantly catapulted GSP into an elite category of fighters.

Not only is he the new middleweight champ, he’s also only the fourth MMA star to hold titles in more than one UFC  weight division, having been welterweight champion twice. After his performance in New York’s Madison Square Garden, some fans are calling St-Pierre the greatest of all time.

Can Robert Whittaker Get a Title Shot?

Bookies and online betting fans were expecting GSP to emerge victorious, however; he was the $1.85 favourite in the betting. It’s also a safe bet that Aussie UFC interim Middleweight Champion Robert Whittaker watched last Saturday’s bout with as much fervour as any punter.

The New Zealand-born Sydneysider won the interim title at UFC 213 in July, defeating Cuba’s Yoel Romero to take the belt, while Bisping was temporarily sidelined by a knee injury. Now that GSP is the new champion, Whittaker is the natural choice for his first title defence.

GSP May Have Other Ideas

That fight, if it happens, won’t happen this year. Whittaker won’t be competing for the rest of 2017, while he recovers from a knee injury of his own. It’s not certain that GSP necessarily wants to fight Whittaker next, anyway. The UFC would prefer it, obviously, as the bout would unify the titles.

But while St-Pierre stayed mum after Saturday’s win on who he wants to take on next, his boxing coach Freddie Roach was clear on his preference: that GSP would do best to return to the welterweight division. Roach cited St-Pierre’s slight slow-down in Round 2 against Bisping as proof that the extra weight is too much for him.

While they wait for the Canadian’s next fight to be decided, MMA fans can enjoy more action at UFC 218 in Detroit, Michigan on 2 December. The main event will be the featherweight title bout between reigning champion Max Holloway from Hawaii and New Jersey challenger Frankie Edgar.

Pseudo-retired MMA superstar bad-boy Conor McGregor has reportedly been arrested in France in connection with allegations of indecent exposure an attempted sexual assault. McGregor, 32, was according to a French ….

Enough Already: Lee Fed Up With Ferguson’s Ranting And Raving  Kevin Lee is very obviously quite fed up of listening to Tony Ferguson rave on about the gruelling training camp ….