Enough Already: Lee Fed Up With Ferguson’s Ranting And Raving 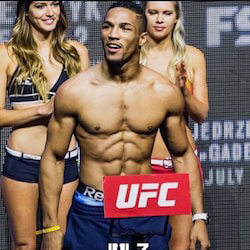 Kevin Lee is very obviously quite fed up of listening to Tony Ferguson rave on about the gruelling training camp that he has had to endure ahead of Saturday’s main UFC MMA interim lightweight title fight event at the T-Mobile Arena in Las Vegas.  Lee has implied that Ferguson has been quite given to bragging and that the training does not the man make, whichever way you look at it.

According to Lee, all that this means is that it’s going to take longer than usual to kick Ferguson to the curb.  Ferguson, 33, comes in riding the wave of a 9 fight unbeaten winning streak, but Lee isn’t impressed by the seemingly super-human feat and has made it clear that his (Lee’s) problem with Ferguson has more to do with his character than with anything else.

Lee has said that despite his always having given Ferguson the respect that he deserves as a result of his performance in the ring, he wasn’t a fan of his haughty nature.  He said that Ferguson was very full of himself and that this would ultimately lead to his downfall, as he had now effectively stopped evolving.

Lee Confident For The Win

In the world according to Kevin Lee, there is no such thing as an “interim” lightweight title fight due to Irishman Conor McGregor never having defended the title that he had won during November of last year.  He proclaimed that after this fight (referring to Saturday’s brawl with Ferguson) he would be willing to give McGregor a chance to take back the title.  Assuming of course, that he would in fact walk away victorious from the MMA fight of the year.

It’s no secret: Tony Ferguson walks to the beat of his own drum.  Fans would no doubt see Ferguson, more than anyone, square it off with McGregor.  The UFC are obviously planning on pitting Nate Diaz with the Irishman instead.  Diaz has not fought since August of last year – since the fight that saw him lose against Conor McGregor.   Diaz has since refused to fight again until he gets one more crack at going up against his archrival.  McGregor’s mind has been on other things, the fight against Floyd Mayweather Jr having been one of the main distractions for 2017, and has not responded to any move on the part of the UFC to “save the date”.

Pseudo-retired MMA superstar bad-boy Conor McGregor has reportedly been arrested in France in connection with allegations of indecent exposure an attempted sexual assault. McGregor, 32, was according to a French ….