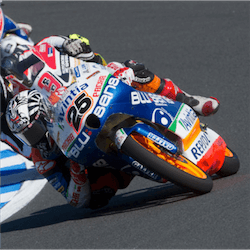 Australian motorcycle fans are no doubt excited by the Australian Motorcycle Grand Prix on Phillip Island in two weeks time, and they have the Grand Prix of Japan coming up this Sunday to whet their appetites. There are four MotoGP races left in the 2017 season, and three of them take place in this neck of the woods: after the Phillip Island race, the action moves to the Sepang International Circuit in Selangor, Malaysia.

The 18th and final leg of the 2017 MotoGP season returns to Europe, scheduled at Valencia’s Circuit Ricardo Tormo on 12 November. With three riders currently within 28 points of each other at the top of the ladder, and Honda, Yamaha and Ducati separated by 26 points on the manufacturers’ standings, there will be plenty of racing thrills to keep Aussie sports betting fans happy in the remaining weeks of the season.

Repsol Honda’s Marc Marquez is hanging on doggedly to his lead in the riders’ championship, so fans can expect another all-out performance from him on the Motegi circuit this Sunday. Although the Spaniard was forced to retire after engine failure at Silverstone, he came back to win the most recent two races: the San Marino-Rimini and the Aragon MotoGPs.

He has so far taken five wins in 14 races this year, which brings his points tally to 224, putting him at the top of the drivers’ championship, with Honda leading the manufacturers’ standings on 274 and Repsol topping the teams’ ladder with 394. Marquez is odds-on in outright futures betting to win the 2017 crown, at odds as low as $0.06 at some online betting sites.

Dovizioso and Vinales Hot on His Heels

The Spaniard is going to have to fight to stay on top, however. Italian Ducati Team rider Andrea Dovizioso is on four wins and 208 points, placing Ducati third on the manufacturers’ ladder with 248 points and third on the teams’ standings with 314. Dovizioso is second on the drivers’ ladder, and the rider most likely to challenge Marquez in Japan.

The other threat to Marquez is his countryman, Maverick Vinales. Third on the drivers’ standings with 196 points, Vinales has helped to put Movistar Yamaha second on both the manufacturers’ and teams’ ladders, at 257 and 364 points respectively.