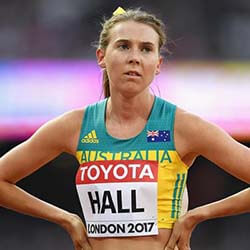 Star Australian runner Linden Hall on Thursday night became the first woman in Aussie history to run 1500m in under four minutes. The Olympic hopeful’s 3:59:67 time at Boxhill is a new national record, with the previous Australian record held by Jessica Hull, who last year September finished the same distance in a time of 4:00:42 in Berlin.

Linden following Thursday’s record smashing win told reporters that she could not believe what had “just happened” and that her stellar performance would take some time to sink in. After using last year’s global hiatus for prime preparation time, Hall says the extra preparation time had been the perfect opportunity for her to condition her body in the right way.

Hall will next compete at the national Australian Track and Field Championships, which is set to take place in Sydney later this month. Once Sydney is behind the star runner, she’ll next gun for becoming the first Australian woman since Margaret Cowley to make it to the women’s 1500 Olympic final. Cowley aced this incredible feat in 1996, with no other Aussie women’s runner having been able to achieve this ever since.

The Aussie runner following Thursday’s record performance said that she had been one of the very few athletes that had actually benefited from lockdown, and that the extra time during the run-up to the next Olympic Games had afforded her the opportunity to work on taking her own personal conditioning to the next level.

Still No Faster Than A Corgi Says Sprinter

Aussie sprinter and Tokyo Olympics qualifier Rohan Browning says qualifying for the Olympic Games is a feeling like no other – one of pace, pain, and incredible non-stop preparation. But ….