Still No Faster Than A Corgi Says Sprinter 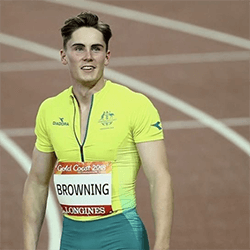 Aussie sprinter and Tokyo Olympics qualifier Rohan Browning says qualifying for the Olympic Games is a feeling like no other – one of pace, pain, and incredible non-stop preparation. But the dashing Aussie, who will soon become the first Australian man to represent the country at the Olympic Games in the 100m event in 17 years, says its also a humbling experience being that the average stumpy-legged corgi could definitely outrun him.

Some would call this humble – others, perspective.

Browning last week told a leading Australian sport broadcaster that running the 100m at a pace faster than 11 m/s was a feeling of pure “elation”, and Olympic selection a childhood dream come true. And for him personally, it also meant ticking an important box that’s been part of a dream he’d harbored since the start of the season.

As for the next goal in sight, Browning said he’d absolutely love to break fellow-Aussie Patrick Johnson’s standing 100m record of 9.93. He said he wouldn’t be willing to train a painful six rigorous days a week if he didn’t think himself capable of breaking a national record he describes as very strong indeed.

Since he’s this year a relatively youthful 23, and with most sprinters only reaching their peak between the ages of 25 and 29, Browning says he considers himself now only in the developmental stage of his running career. Becoming the best in your field takes time, says the star athlete.

The young Aussie certainly appears in the right frame of mind given he’s headed for an Olympic Games competed in front of empty stadiums and without the usual fanfare and pomp of previous Games.

Star Australian runner Linden Hall on Thursday night became the first woman in Aussie history to run 1500m in under four minutes. The Olympic hopeful’s 3:59:67 time at Boxhill is ….