Ferguson Chokes Out Lee at UFC 216 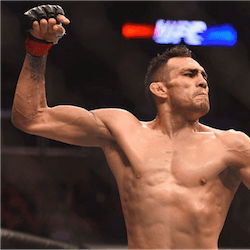 Californian MMA fighter Tony Ferguson made heavy weather of his UFC 216 bout against Nevada rival Kevin Lee on Saturday night, but 4 minutes and 2 seconds into the third round, he finally got Lee to tap out with a triangle choke. The win in the main-card fight at the T-Mobile Arena in Las Vegas makes ‘El Cucuy’ the new Interim UFC Lightweight Champion.

The fight started with an aggressive Lee scoring a few hits, until Ferguson swept his legs from under him and settled into a patient defensive mode. After being put on the canvas, El Cucuy came right back up and put Lee down hard, and halfway through the round they got to grappling on the canvas. Lee was on top and handing out heavy punishment when the bell went, but he then received a warning for a late punch.

With his jab doing sterling service in Round 2, Ferguson was too fast for Lee to hit, although both fighters were slowing by the end of the round. On his back again in Round 3, Ferguson got Lee’s left arm under control and almost achieved an arm bar, but Lee managed to wrestle out of that, leaving only Ferguson’s chokehold to break. He couldn’t do it, and was forced to tap out.

The other title fight on Saturday’s main card was the Flyweight bout between Demetrious Johnson and Jay Borg, which Johnson won with an armbar submission in Round 5. In three other main-card bouts, Fabricio Werdum beat Walt Harris, Mara Romero Borella defeated Kalindra Faria, and Beneil Dariush beat Evan Dunham.

A Unification Fight between Ferguson and McGregor?

With the dust of his Floyd Mayweather Jr freak show settling, reigning UFC Lightweight Champion Conor McGregor must be next in Ferguson’s sights. A bout between the two would unite the two titles, and Pay Per View revenues alone should make it attractive to promoters.