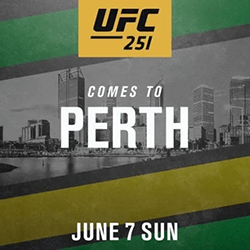 With the Ultimate Fighting Championship 251 confirmed for Perth on the 6th of June 2020, the biggest Mixed Martial Arts promotion on earth is coming back to Australia.

It’s the second time that the UFC has brought a pay-per-view card Down Under in less than 12 months, with the franchise’s quick return no doubt being a result of the massive success of UFC 243: Whittaker vs Adesanya. That event was held at the Marvel Stadium in Docklands, took just over AU$8 million at the gate, and saw Israel Adesanya, the Nigerian-New Zealand professional MMA fighter, shoot to fame as a result of his KO of Robert Whittaker at the 3.33-minute mark.

There will be no Australian Football League held in Perth over that weekend. The West Coast Eagles are having a bye and the Fremantle Dockers are playing the Sydney Swans in the latter’s hometown.

UFC 251 will be held at the Perth RAC Arena which can seat 15 000 people and hosted UFC 221 in 2018. Although the list of fighters has yet to be confirmed in full, Kyrgyzstani-born Peruvian Valentina Schevchenko is definitely going to be defending her flyweight title against Joanne Calderwood, who is both a professional MMA fighter and a Muay Thai champion from Scotland.

It’s also highly likely that Alex Volkanovski, the Australian MMA fighter, Rugby League player, and current UFC Featherweight Champion will make an appearance. He will probably be defending his 145-pound belt in a rematch against Max Holloway, born in Honolulu, Hawaii, in the United States.