Cowboys and Redskins Both Winners 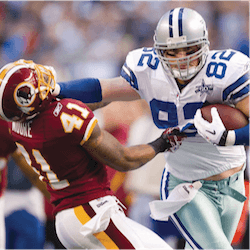 The controversy over the #TakeAKnee protests at NFL games has overflowed from social media into the mainstream, and at the moment the news of what players did or didn’t do during the USA’s national anthem seems more important than reporting on the match that followed.

Complicating the issue is the fact that a protest that began last year, when Barack Obama was still president, to highlight black footballers’ perceptions of racially biased policing and police impunity in black civilian killings, has been twisted by Donald Trump into an issue of ‘respecting the flag’ and ‘supporting the troops’.

Sometime after all the standing, sitting, kneeling, arm-linking and staying-in-the-locker-room is dealt with, some football actually gets played, which is the bit Aussie punters are really interested in. On Sunday night, betting fans with an appetite for risk were rewarded, when favourites the Oakland Raiders went down in a shock defeat to the Washington Redskins.

Raiders’ First Loss of the Season

The Raiders were 2-0 going into Sunday night’s game, and fancied by the betting sites to continue their unbroken streak against the 1-1 Redskins. But the speed that the Redskins brought to both their defense and their pass rush had the West Coast side stumped, and the pass protection quarterback Kirk Cousins received, along with the support of running back Chris Thompson, made the Washington side unstoppable.

The final score was 27-10 to the Redskins, leaving both teams now on 2-1. This week, the Raiders play an AFC West derby against the Denver Broncos on Sunday, while the Redskins face the Kansas City Chiefs next Monday night.

This week’s Monday Night Football featured NFC East’s Dallas Cowboys against NFC West’s Arizona Cardinals, with both teams starting the game on a season record of 1-1. At the start, some fierce attacking from the Cardinals had the Cowboys on the back foot, but once the Dallas team’s defense settled down, they proved a much more formidable force.

The Cardinals refused to roll over, however, and the teams were tied 7-7 at halftime. But in the last two quarters, pressure from Dez Bryant, Dak Prescott and Zeke Elliott paid off for the Cowboys, and they finished with a 28-17 win. They now face the LA Rams on Sunday, with the Cardinals set to play the San Francisco 49ers. If you want to get in on the betting action for the NFL, or just about any other popular sport, check out the odds available online at Crownbet!

On Tuesday the 28th of April, the World Players’ Association undertook a mass conference call to talk about how COVID-19 has impacted sports men and women around the globe. 70+ ….

The Australian sports community has welcomed seven new members into the Sport Australian Hall of Fame. The members that have been inducted include Denis Cometti, Matt Cowdrey, Robbie McEwen, Stephanie ….