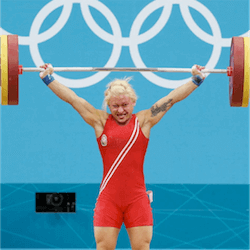 As much as weightlifting fans around the world have enjoyed the top-class competition on display at the IWF World Championship in Anaheim, California, the event has taken place under a cloud of uncertainty.

As the championship ends on Tuesday, the International Olympic Committee (IOC) begins its two-day meeting in Lausanne, Switzerland, to decide the sport’s Olympic future. It’s possible that weightlifting, an Olympic sport since 1920, may see its swansong at the 2020 Summer Olympic Games.

It would be a blow to the Games to lose it: as weightlifting supporters point out, the Olympic motto is “Faster, Higher, Stronger”. With tug-of-war already gone the way of the dodo, what, they ask, will provide the “stronger”, if weightlifting is dropped too?

Six months ago, IOC President Thomas Bach called the doping problem in weightlifting “massive”, and it’s a problem that goes back decades. At the height of the Cold War, doping was rife in most sport across the Soviet Bloc, and it spread even further after 1990.

There were way too many positive tests for doping during the 2015 World Championship, and when the IOC retested samples from the 2008 and 2012 Olympics earlier this year, so many cheats were revealed that nine countries were barred from this year’s World Championship, including global weightlifting heavyweights like Russia, China and Kazakhstan.

Since Bach’s bombshell in June, the International Weightlifting Federation has been feverishly working on a report detailing how they intend to clean up the sport, and police strict new anti-doping policies. It is this report that will guide IOC deliberations in Lausanne.

Some have suggested that since fines appear to be ineffectual, longer suspensions and bans might be a better idea. Handing over testing to an independent testing authority might also do wonders for weightlifting’s credibility.

Presenting a clean World Championship in Anaheim could also count in the IWF’s favour. The 2017 tournament proved that there are plenty of clean nations still involved in the sport, quite capable of competing in the Olympic spirit. Hopefully for weightlifting supporters, it will be enough to sway the IOC.

America Back In The Weightlifting Game The Americans have come to the party, and come in a big way at this year’s IWF Weightlifting World Championships.  Team USA is ready ….