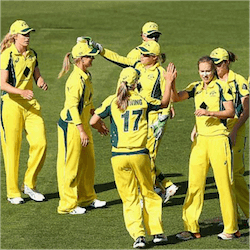 The Australian women’s cricket team is already safely qualified for the 2017 ICC World Cup, by virtue of the fact that the team finished in the Top 4 of the 2014-16 ICC Women’s Championship. The other three teams already qualified via the same route for the tournament, set to be held in England from June 26 to July 23, are the host country, New Zealand and West Indies.

However, this doesn’t mean that Australian sports betting fans have no women’s cricket to interest them until June. There are still 10 other national teams competing for the four spots left in the 2017 ICC Women’s World Cup, and they will meet in Colombo, Sri Lanka, from February 07 to 21. The 2017 ICC Women’s World Cup Qualifier tournament promises plenty of betting thrills, as some fiercely competitive cricketing nations are involved.

Of course, any nation with official ICC ODI status is also guaranteed a place in the World Cup Qualifier. However, the ICC only affords ODI status to the 10 teams at the top of the ODI ladder, based on their performance records. Eight of those spots on the ladder are filled by the eight women’s cricket teams already mentioned. Bangladesh and Ireland are in ninth and tenth place, so they also get automatic entrance to the World Cup Qualifier.

This year, the four regional qualifiers are Zimbabwe, Thailand, Papua New Guinea and Scotland. At the end of the 2017 ICC Women’s World Cup Qualifier on February 21, the four teams at the top of the qualifier table will go through to meet Australia, England, New Zealand and West Indies at the World Cup proper in June. If we had to place a bet now, we’d reckon India, Pakistan and South Africa should go through, but Ireland, Sri Lanka, Scotland, Zimbabwe or Bangladesh are all capable of providing an upset.