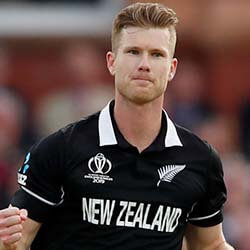 Several new rules as well as a revision of existing ones were announced on Tuesday by the organisers of the Indian Premier League (IPL).

The latest edition of the cash-rich tournament gets underway in Indian on March 26, with MS Dhoni’s Chennai Super Kings scheduled to take on the Kolkata Knight Riders in the opening game.

One of the new rules due to be implemented this year came from a suggestion made by the Marylebone Cricket Club (MCC). The cricket club suggested that the Board of Control for Cricket in Indian (BCCI) adopt a rule that stipulates that a new batter is to replace a dismissed batter upon being caught out, regardless of whether or not both batters had crossed each other before the catch.

As what would have been expected, the rule has been met with a mixed response.

A player who isn’t a fan of the new rule is New Zealand all-rounder Jimmy Neesham, who will be starring for the Rajasthan Royals in the 2022 edition of the tournament. Neesham says the rule will essentially reward batsmen who aren’t continuously aware of the current situation in the match. He said he fails to understand the logic behind the change.

Other rule changes announced this week include that of an increase in allowable unsuccessful reviews, from one to two, and a different way for deciding the result of the final should match conditions not permit a Super Over.

Players, in the meantime, have now started to arrive in India for the upcoming tournament.