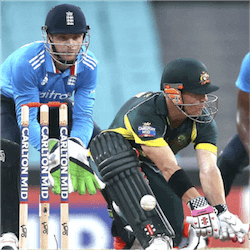 Saturday’s Trans-Tasman Tri-Series match at the MCG saw Australia beat England even more convincingly than they did in their first encounter of the T20 series last Wednesday.

In Hobart, the English batsmen at least made a strong start, before the Aussie bowlers, with Glenn Maxwell at the forefront, engineered a collapse that saw England finish on 155/9. Maxwell then replied with 103, helping the Aussies to 161/5 in just 18.3 overs, to win by 5 wickets.

At the MCG, Aussie skipper David Warner again won the toss and again put England in to bat first. Instead of a positive start followed by a sudden collapse, this time the English struggled against the Australian bowling from the beginning.

Kane Richardson took 3/33, backed up by 2/28 by Billy Stanlake, a brilliant 0/18 by Marcus Stoinis in his 4 overs, and 1/29 by Andrew Tye. Ashton Agar was also economical, at 0/27, and Dawid Malan’s run-out by Warner helped the Baggy Greens restrict their opponents to 137/7; Sam Billings top-scoring on 29.

Since they beat New Zealand in the opening match of the Tri-Series, Australia remain undefeated after three matches, and are thus assured of their spot in the final in Eden Park on February 21.

Australia still have one more match before the final, against New Zealand at Eden Park on Friday, February 16. With a final at the same venue to prepare for just a few days later, it’s unlikely that Warner’s men will be treating it as a dead rubber.

England play their next two games of the tournament in New Zealand, too; both of them against the hosts, with the last on Sunday, February 18. Given that the Black Caps only recently relinquished the world No. 1 spot in T20 to Pakistan, they should prove the stronger side.