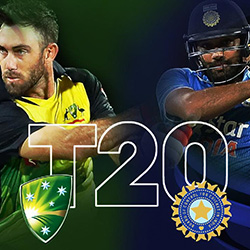 Australia have beaten India by 35 runs for the fifth day one international played in Delhi, and have completed their comeback from 2-0 down and won the five match series 3-2. Opener Usman Khawaja claimed his second hundred for three matches as he guided his team to a 272-9 during their 50 overs. Rohit Sharma made 56 in response, but the Indian batsman struggled to hold his composure as leg spinner Adam Zampa took 3-46 and fast bowler Pat Cummins 2-38.

The hosts were eventually bowled out for 237 as Australia took victory for the day. It is also Australia’s first one day win since they bested Pakistan for the 2016-17 season, and the first time that the Indian team have lost a series at home since 2015. Khawaja and his 76 run stand along with captain Aaron Finch was brought to an end when Finch was bowled out by all rounder Ravindra Jadeja for 27. He managed to take 10 fours and two sixes as he worked his way up to three figures, but his dismissal seemed like the beginning of the end for the Australian team.

They slopped from 175-1 to 182-4 before Cummins and Jhye Richardson pushed the score up as they took 279. Shikhar Dhawan was outed in the fifth over during India’s replied, but once Rohit had been stumped after leaving his crease to Zampa, India’s resolve had been broken. Some late game hitting from Bhuvneshwar Kumar couldn’t bring the team back.