Australia Collapse To Give Proteas the Series 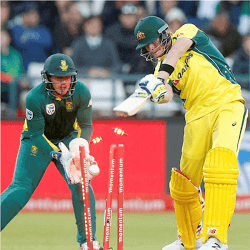 After suffering a whitewash One Day Series in South Africa, the Australian Cricket team had a lot to prove when it returned home for the Test series. Things got off to a bad start with Proteas claiming the first test much to the dismay of many punters and cricket fans. The second test proved to be the decider and after being slated by the media, the team promised to throw everything they had at the resilient South African side and restore a bit of pride to Australian Cricket.

Anyone betting on the outcome of the second and deciding test would probably have been better off taking a punt on the Wallabies as things got off to a very rocky start. All of the action happened on day 1 with the home side sent into bat. The day had barely begun when wickets began to tumble. With the country looking on in complete and utter horror, the Proteas dismissed the Australian side for just 85 runs, sending shock waves through the sporting community. Later on in the day, some sort of order was restored as the tourists also lost five wickets within the first few hours of being at the crease.

The Collapse of Australian Cricket

At Stumps on day 1, the South African side had racked up 171 runs for the loss of five wickets. Day 2 saw the Proteas back in action with the bowlers doing everything they could to reduce lead. Despite their ball training and change in bowling strategy, Australia failed to curtail the mighty Proteas who eventually racked up a total of 326 runs. Going into bat, Australia had 241 runs to make up before they could actually create a score of their own.

Play could not resume on day 3 due to a complete washout from the inclement weather. If anyone was hoping the weather would help take the side into a draw it was not to be. The hosts resumed play on day four on 121 for 2. This marked the beginning of the end as the side crumbled and lost 8 wickets for just 32 runs inside of 20 overs. Australia fell an innings and 85 runs short, handing the Proteas another win and the Test series. The humiliating loss struck a serious blow for Australian cricket causing a media frenzy and a string of failed bets.