Australia Lose Control Against the Proteas 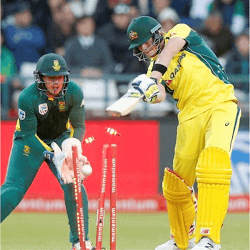 Australia Struggle to Rein in the Proteas

Going into the first test against South Africa, the Australian cricket team had a lot to prove. Coming off the back of yet another series defeat, the fired up team were keen to show what they could do on home ground. In the first innings, South Africa struggled to acclimatise to the pitch and the fast pace bowling. The normally strong batting line-up crumpled with the Proteas all out on 242 runs.

With a chance to establish their dominance, Australia also failed to make any headway with the bat and were also dismissed for a paltry 244 runs. Day three saw a massive turn of events as South Africa got into their batting grove. While Australia has always prided themselves on their fielding abilities, day three was a day they would sooner forget.

Mitchell Starc had a golden opportunity to take out Elgar, but got himself tied up and dropped the ball. Adam Voges also misjudged a high ball from Quinton de Kock which could have made a massive difference to the scoreboard. When Elgar was cruising along on 81 runs, the Australian team missed a sky ball as it disappeared into the sun, dropping cleanly between Starc and Nathan Lyon. Towards the end of the day, De Kock top-edged a ball but Voges completely missed it running backward with the ball going to ground once again.

All to Play for on Day 5

At the end of day 3, South Africa went to stumps with 390 runs for the loss of six wickets. Day 4 saw a concerted effort by the Proteas to establish their dominance with runs coming fast and thick. South Africa racked up another 150 runs before they declared at 540 for 8. Going into bat, Australia had a mountain to climb with one and a half days to get it done.

David Warner opened the Australian innings with a devastating attack on the bowlers, smacking runs off of every stray ball that came his way. His reign of terror soon ended with an absolutely cracker of a throw from Temba Bavuma at short cover. Bavuma picked up the ball, then dived and threw the ball to the non-striker’s end knocking out the stumps before Warner could past the crease. With Warner on his way, the collapse began.

A partnership from Steve Smith and Usman Khawaja was looking strong before Kagiso Rabada joined the attack. Rabada dismissed Steve Smith in the 45th over and Adam Voges in the 47th over. At stumps on day four, Australia left the field on 169 runs for the loss of 4 wickets. With just six wickets in hand and one day to do it, Australia require 370 runs to win.