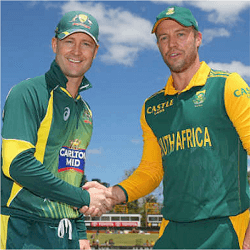 Australia On the Back Foot in the ODI Series

Ten years after witnessing the highest scoring ODI game in history, cricket fans at the Wanderers stadium in Johannesburg, South Africa were treated to a display of true power and class. Coming off the back of a six-wicket defeat, Australia was keen to settle the score and prove to the cricket world that they were still a force to be reckoned with. It was not to be though, as the South African batting line-up blasted their way to 142 run win, the second biggest against an Australian Side.

Having won the toss, the Australian captain decided to put the hosts in to bat, choosing to chase on a wicket known for its high scores. In Centurion it was Quinton de Kock dominating play but at the Wanders, the South African captain, Faf du Plessis was the man dishing out the punishment. After just 10 overs the home side were sitting pretty on 66 for 0. In the absence of seasoned bowlers, Mitchell Starc and Josh Hazlewood, the Australian side struggled to stem the flow of runs.

Australia Struggle in the Absence of Seasoned Bowlers

The understrength Australian bowling side was taken to pieces as Faf du Plessis batted his way to an impressive 111 runs. Combined with Duminy’s big hitting and Rossouw’s flurry of boundaries, the home side cruised their way to an impressive 362 runs after 50 overs. Going into bat, Australia failed to make use of the first 10 overs losing Aaron Finch in the second over and putting Australia on the back foot right from the start. Despite a valiant effort by David Warner and Travis Head making his highest ODI total, the South African’s continued to pick off wickets and dominate play.

In the end Australia were dismissed for 219 runs with 12 overs to spare. The one-sided match closely mirrored the massive defeat in Centurion a few days earlier, leaving Australia wondering what to do next. Speaking about the loss, vice-captain David Warner said that Australia need to find a better balance between attacking in the opening overs and being patient enough to wait for scoring opportunities. Australia is now two-nil down in the five match ODI series. The third ODI match will take place in Durban on the 5th of October. This must-win match for the Australia will have punters and cricket fans glued to their seats.