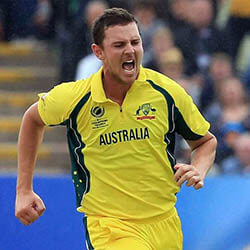 Even though Josh Hazlewood says he expects the Australian side to win every last upcoming game played against England, he at the same time also realises that the England series will be everything but easy sailing.

Since the English squad will be taking on their competition without some of their best players, Hazlewood said winning the series can be expected to fall in Australia’s favour. Commenting on some of the players cited to compete in the series on England’s behalf, the Aussie fast bowler was quick to point out the sheer cricketing value behind the decisions to include the likes of Dawid Malan and Tommy Banton.

Even though England did end up winning 11 of their 14 most recent T20 games played, Hazlewood appeared slow to concede that the Australian side has too much to fear from the significantly thinned-out English side. Even though the star bowler says he’s not at all blind to the fact that England are “flying” right now, Australia remains a team fully capable of winning in any format played in any part of the world. Competition will no doubt be tough, but that certainly doesn’t imply as much as even a single loss for the Aussie side, explained Hazlewood.

Australia is after all a team that has managed to win their last four series in a row. Australia keeps on winning, said Hazlewood, and for as long as especially the bowling unit keeps on doing what it’s been doing up until this point, the Aussie side shouldn’t have too much trouble reigning victorious over their hosts.