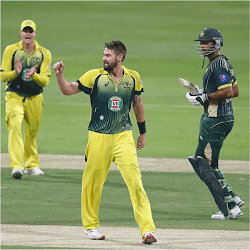 After chasing 490 runs for victory, Pakistan fell just 40 runs short, handing Australia one of the most nerve racking wins ever witnessed at the Gabba. The first test match of the series got off to a great start for Australia who racked up an impressive first inning of 429 runs. In reply the tourists only managed to muster a paltry 142 runs to give Australia the clear lead going into the second innings. After another impressive batting performance, Australia eventually declared on 202 for 5 handing the hosts a record target of 490 runs for victory.

Going into the second innings, local bookmakers put Pakistan on odds of 600-1 to actually pull off the highest ever second innings run chase in Test cricket. By the time Pakistan got stuck into their batting, things were looking very different. Punters who had actually backed the side would certainly have been on the edge of their seats as the visitors staged one of the most momentous comebacks in test cricket history. Chasing an impossible target, Pakistan headed into the second innings with nothing to lose.

Too Close for Comfort

Despite their poor performance in the first innings, the visitors played some of the best cricket seen at the Gabba. Younus Khan made an impressive 65 runs followed up by Azhar Ali with 71 and Wahab Riaz putting on another 48 to give the visitors a solid start. However, the man who would change everything was Asad Shafiq coming in at number six. The unlikely batsman got stuck in and after six hours of play had racked up 100 runs and showed no signs of stopping.

With the impossible target getting closer and closer, Asad Shafiq continued to play his heart out climbing to a career defining 137 runs eventually falling victim to some impressive bowling by Starc. With the playmaker making his way back to the stands, it was just Yasir Shah slugging it out with a personal best 33 who stood between Australia and the test victory.

But in a comical turn of events, Shah stepped out of his crease after a failed LBW shout and was quickly run out thanks to the foresight and quick hands of captain Steve Smith.  After a gruelling session and much fingernail bighting, the Australian team finally dispatched the visitors just 40 runs short of victory. The win puts them 1 up in their 3 match test series.