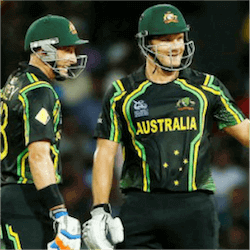 Australian Cricketers Risk Their Lives For $65,000?

Australian cricketers have a very difficult choice ahead of them. It has been revealed that the Twenty20 final is set to be held in Lahore. The area is a known trouble spot in Pakistan, and a number of attacks in the area have claimed over 100 lives in recent weeks. Not a fortnight ago a suicide attack took 13 lives. All eyes are on the Australian cricketers, with many wondering if they are willing to enter the dangerous area in order to participate in the cricket match.

Among those who might be entering Lahore are Shane Watson and Brad Haddin, who would be required to make the trip from their current location in Sharjah, in the United Arab Emirates, over to Pakistan for the final.

Furthermore, it has been revealed that in order to tempt the famous cricketers to take the risk, officials have been offering payments of up to $65,000. As to which players have been offered which specific amounts has not been revealed. Pakistan Minister Shahbaz Sharif has gone on record, however, to state that security considered foolproof would be provided for the Australian players, should they accept the invitation.

Conversely, Imran Khan, leader of the opposition party, Pakistan Tehreek-e-Insaaf, took to Twitter to declare that the Twenty20 finals being held in Lahore was, in is own words, madness. He went on to say that no one wants to see international cricketers return to Pakistan more, but that the finals being held in Lahore was an enormous risk, offering very little in the way of benefits.

He added that if, God forbid, something did happen during the final, that international cricket would be absent from Pakistan for at least a decade.

Another official statement came in the form of travel advice from the Australian Department of Foreign Affairs and Trade. The advice given was blunt and to the point, saying that Australian cricketers should reconsider any ideas of entering into Lahore. The reasons given were the unpredictable security situation, as well as the high chance of terrorist attack, kidnapping and violence.

There is no official word yet as to whether any of the Australian players are considering entering into Lahore, and taking the cash incentive. It is understood, however, that Shane Watson and Brad Haddin have made it clear that they will not be taking the risk and braving the dangerous situation. This is not official, however, and as to how the situation pans out remains to be seen.