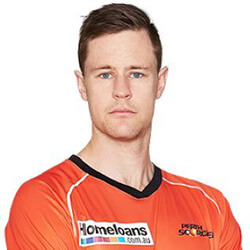 Jason Behrendorff, who had been part of Australian’s ICC World Cup team, has officially confirmed that he will be undergoing lower spine surgery. Talking about his decision, the pacer told reporters that he’s had the same injury over the last few years, and they’ve tried a few different things to remedy it, but it has always returned. He added that after a lot of thought and discussion, he’s decided that surgery is the best method for a more permanent fix.

The 29-year-old bowler was part of his country’s ICC World Cup squad, and played a total of five matches where he took out nine wickets. Behrendorff will be heading to New Zealand with hiss family for the surgery in the next few weeks, and is set to miss the entire domestic summer. His participating in the ICC T20 World Cup 2020 for October remains uncertain, but the timing of the surgery means that he will have every chance to be fit.

Fast bowler James Pattinson underwent a similar surgery two years ago, which allowed him to make a comeback to the Australian team. Behrendorff was ruled out of the T20 Blast in August due to his back injury. He appeared in another two matches against Essex and Glamorgan, but wasn’t able to pick a single wicket for the two games. He has stepped away from first class cricket to play limited over, and has 126 wickets under his belt with an average of 23.85.

Players In Agreement With CA On Afghanistan

Australia white-ball captain Aaron Finch says players on the national cricketing squad fully support the country’s decision not to continue with a Test against Afghanistan should the Taliban continue with ….

Pakistan Calls On CA For Clarity Over Tour

Pakistan has reportedly called on Cricket Australia to show reason in its decision about touring the country next year. It in the same breath however expressed doubt in Australia’s intentions ….

Ronit Sharma is back. And right now, this includes his having scored a long-overdue first Test century on foreign soil against England at the Oval. It might have taken him ….

Former Aussie cricket star Usman “Uzzie” Khawaja has accused his ex-teammates of being guilty of backstabbing. While Khawaja and Australia national coach Justin Langer have had their fair share of ….