Chris Lynn ruled out of ODI series due to injury 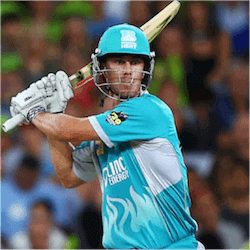 Injury Forces Chris Lynn Out of the ODI Series

Australian batting sensation, Chris Lynn has been pulled out the One Day International series against Pakistan. A neck injury means that the newly vetted batsman will miss the rest of the ODI series, giving punters and cricket fans something to think about. The Brisbane Heat star will also miss out on the Big Bash League (BBL) as well as the upcoming One Day tour of New Zealand.

Lynn made his debut for Australia in the first ODI match against Pakistan not too long ago. The star batsman recently took time off from his BBL games to rest up before his all-important debut for the Australian team. But after just getting his toes wet, Lynn has been ordered to rest after the pain in his neck got worse due to a bulging disk.

On Tuesday this week, Lynn went to see a specialist in Brisbane. According to reports, Lynn was ordered to take a couple of weeks off, effectively ending his Big Bash League season with the Brisbane Heat who are currently sitting at the top of the ladder. Speaking to the press, Australian coach Darren Lehmann said that Lynn had been playing through a lot of pain and has got to the stage where he cannot function properly. Lehmann went on to say that Lynn will have to take a few weeks off to calm the neck down as it is quite aggravated at the moment.

Peter Handscomb Given the Nod

The Australian team had high hopes for the Heat star when he made his debut for the national side. But after re-aggravating his neck injury in the very first game, the batting star was forced to miss the second match and now faces a few weeks of mandatory rest. Taking his place is test cricket star Peter Handscomb. The experienced test player is set to make his One Day International debut for Australia in the third ODI match against Pakistan at the WACA on Thursday.

The installation of Handscomb is one of two changes that will be in effect for the third game. After losing to Pakistan in Melbourne, Billy Stanlake will come in for Mitchell Starc who is being rested. Australian Coach Darren Lehmann has praised Handscomb for his performance this summer. His reward is a spot in the ODI side. Meanwhile the home Twenty20 series against the Sri Lankans will get underway on the 17th of February.