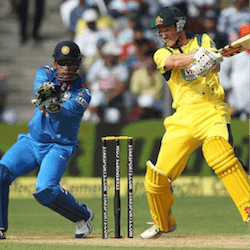 The battle for supremacy between the ICC’s two top-rated Test teams seesawed again on Tuesday, with Australia’s second match in India ending on day four after a disastrous batting collapse. India’s 75-run victory doesn’t match up to Australia’s 333-run triumph in the first Test in Pune, but it levels the series and leaves the hosts still top of the world rankings on an ICC rating of 121, with the Baggy Greens close behind on 109.

Australia started the Bangalore match strongly, outstripping India’s 189 in the first innings by 87 runs. India came back doggedly to post another 274 in the second innings, leaving the visitors only 187 to get over two days. Instead, a wildly unpredictable day four pitch saw them scuttled out for 112 in under 36 overs.

For Australian supporters and betting fans, it was a frustrating day to end a Test that featured even more acrimony than usual for an Australia/India clash. Aussie skipper Steve Smith took a lot of flak from home-side supporters and Indian skipper Virat Kohli, after looking to the Australia dressing room, seemingly for advice on whether to have his second-innings LBW dismissal reviewed, in contravention of the rules.

Kohli later insisted that this tactic was not a ‘brain fade’, as Smith claimed, but had been going on consistently. India’s behaviour on-field was hardly impeccable, however; Kohli, Ravichandran Ashwin, Cheteshwar Pujara and Ajinkya Rahane were all responsible for some acrimonious chirping, although Smith, Mitchell Starc, Steve O’Keefe and Josh Hazlewood all gave as good as they got.

Two Matches to Clinch the Series

The two sides will meet again next Thursday, March 16, at the JSCA International Stadium in Ranchi, in the far north-east of the subcontinent. The fourth and final Test is scheduled for Dharamsala in the northern highlands from 25-29 March.

Despite a strong start at Bangalore, with Nathan Lyon taking a record-breaking 8 for 50 on day one, the pitch deterioration by day four triggered Australia’s chaotic second innings. The Baggy Greens’ final six wickets fell for just 11 runs, so fans will be hoping for pitches that hold up better over the full five days in the last two Tests.