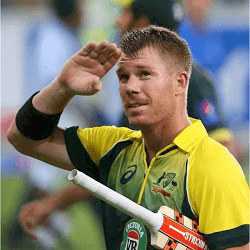 Warner Bats His Way into the History Books

After a blistering performance in Canberra, David Warner has cemented his place as one of Australia’s best ever one-day batsman. The opening batsman blasted a massive 119 runs from just 114 ball against the Black Caps in a powerful display of cricketing genius. The century takes his total up to six for the calendar year, surpassing Ricky Ponting’s previous record of five. This extraordinary feat puts Warner in class above all other Australian batsman.

David Warner also joins fellow opener Matt Hayden as Australia’s fourth highest ODI Century scorer with a total of 10 to his name. The top three spots belong to Adam Gilchrist, Mark Waugh and Ricky Ponting. Going into the match, Warner and his fellow teammates blew the Black Caps away, racking 378 runs for the loss of five wickets at the Manuka Oval. The impressive score line is Australia’s second biggest total on home soil and proved too much for the Kiwis to follow.

A Solid Performance from the Top Order

On the day, it was Warner and captain Steve Smith putting on the big runs. A solid 72 from Smith aided by a blistering 76 from Mitchell Marsh put the Australian’s firmly ahead. For the two openers, 2016 was a year to be remembered. The unstoppable due racked up more international cricket runs than any other batsman in the world. Warner claimed top spot with 1213 runs followed by Smith with 1154 runs, a clear 300 runs more than their nearest rival, the South African Quinton de Kock.

After a dismal performance in South Africa, Warner steadied the Australian side, bringing them through the darkness and into the light. On Friday, Warner will receive another chance to break some records at the MCG. If he can pull off another Century, he will equal Sourav Ganguly’s total of 7 centuries in one year putting him just behind the mighty Sachin Tendulkar who holds top spot on 9. It wasn’t long ago that the 30-year-old batsman was nowhere near the top spot in ODI and T20’s test matches. A few years on, Warner has cemented his place as one of the best players all three formats of the game.

The players with the highest number of ODI Centuries in one year includes: