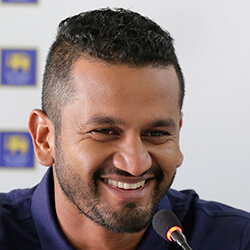 Sri Lanka have decided to leave out five of their more experienced players from their World Cup team and have appointed Dimuth Karunaratne as the squad captain despite him not having played a one-day international game in over four years.

Batsman Dinesh Chandimal, openers Upul Tharanga and Danushka Gunathilaka, along with off-spinner Akila Dananjaya and wicketkeeper Niroshan Dickwella have all been left out of the official team roster. Batsman Karunaratne, who is the current Test captain, has since replaced Lasith Malinga as the ODI skipper. Fast bowler Malinga, as well as ex captain Angelo Mathews – who was fired as limited overs captain before the English tour – have both been made part of the 15-man squad.

Chandimal took over Mathew’s role but was since dropped from the 5-0 series loss to South Africa earlier this year in March. 30 year old Karunaratne led the team to a Test series win against South Africa a month earlier, but was given a $7,500 fine after he was charged with drinking and driving following a crash he was involved in during March. The World Cup, which is set to take place in England and Wales, will see 1996 winners Sri Lanka beginning their campaign by facing New Zealand, where they will play in Cardiff.

Batsman Lahiru and all-rounders Milinda Siriwardana and Jeevan Mendis have been recalled, along with leg spinner Jeffrey Vandersay. All three of these players have not played in an ODI for two years.